RapidSpike would like to make a statement about how one of our developers assisted the City of York Council with a potential data breach on their One Planet York mobile app in early November.

Our developer identified a significant security vulnerability with the One Planet York app: it was sending the personal details of its users, to other users of the app, whenever the ‘Leaderboard’ page was selected. 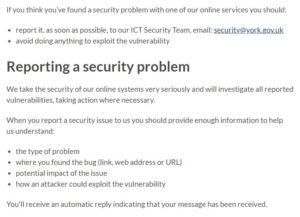 It is important to note here that our developer did not do ‘anything to exploit the vulnerability.’ He simply browsed to a page within the app, as any user would.

We’re releasing this statement in response to the reporting of the data breach and to help protect and encourage white hat security researchers who perform an absolutely critical role in the fight against cybercrime.

We’ve recently been developing new security features for our Digital Experience Monitoring platform. Whilst building these features, our developer was utilising a number of diagnostic tools, including the popular Burp application. Whilst this tool was running, our developer noticed a number of unusual transactions between the One Planet York app and the API that powers it.

Accessing the app ‘Leaderboard’ screen caused the API to push the app’s top-ten users’ personal data, in plain text, to the app. This personal data included the users’ name, email address, phone number, postal address, postcode and other sensitive information such as their hashed password (which appeared to be a SHA256 hash, at least) and that password’s salt: 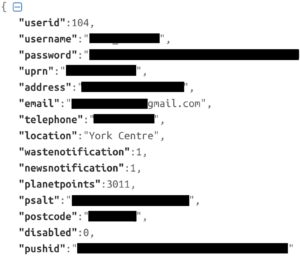 Screenshot from the API POST to our developer’s mobile

Whilst our developer saw the password salt stored and transmitted alongside the hash, at no time were Council servers compromised or otherwise accessed using this data. The data was sent in a GET from the ‘https://opyapp.appyork.com/api/user/leadership.php’ API endpoint. Hashed passwords and their corresponding salts are frequently used by attackers in similar situations to breach information systems. Fortunately, our developer found this fundamental security weakness before it could be exploited by an attacker.

We must be really clear at this point: our developer did not manipulate any requests. The app simply transmitted this personal data as a response to the GET request for the ‘Leaderboard’ page. This personal data was sent to any user of the app when they browsed that page.

Although the personal details of only a very small number of users were observed in these API calls, we do not know if manipulating the API calls could have exposed more. Our developer did not attempt this, or any further action. Instead, he immediately, after seeking advice, informed the City of York Council data protection and security officer. In subsequent email exchanges, he responded in a timely manner to further requests for information, stating clearly that he stumbled across a security vulnerability, that he was informing the council in good faith, and that they did not store any of the personal data that had been exposed by the app.

York City Council subsequently released details of the responsible vulnerability disclosure but instead chose to call it a ‘deliberate and unauthorised access by a third party,’ before reporting our developer to the police. The Council justified this by saying they were unable to contact him: 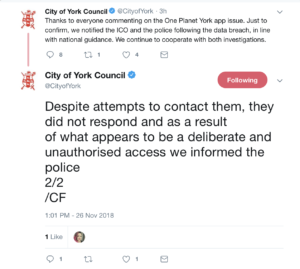 Our developer actually replied to their email in just 18 minutes of their initial email:

He then replied to their subsequent email, asking for our developer to delete any personal data, within the same working day:

Screenshot of the subsequent email from our developer’s Gmail account

The Council’s initial statement and subsequent public media reporting left us confused with the portrayal of the issue. There is an established precedent in the UK for legitimate security researchers to disclose vulnerabilities within information systems to relevant security teams. The Council’s positioning of this good-faith disclosure as a deliberate attack flies in the face of the UK Government’s National Cyber Security Centre advice on the matter, and the International Standard framework for vulnerability disclosure.

We have to say that North Yorkshire Police’s Digital Investigation & Intelligence Unit dealt with the whole situation superbly, and should be commended for their approach. It must also be noted that the security community have also stood up and supported our developer, even without the full story.

People who detect security vulnerabilities should be encouraged to responsibly disclose their findings to ensure that issues are resolved swiftly, and North Yorkshire Police agree: 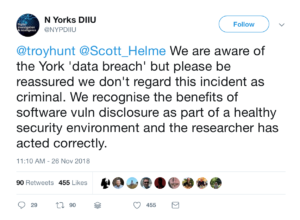 We support our developer’s actions, and believe he acted in the public’s best interests at all times. The handling of the One Planet York data breach led the public, our developer and our team to have some anxious moments until the police confirmed all was OK.

At RapidSpike we are trying (amongst other things) to help the world combat cybercrime. A relative of one of our own team was hit by the recent Vision Direct breach. This and the One Planet York vulnerability brings home the need for us to become even more focused on the ongoing fight against online fraud.

RapidSpike is a Digital Experience Monitoring Platform that interacts with digital platforms exactly as customers do.

RapidSpike is a part of the Storm Technology Group that also includes the PCI QSA company Data Protection People, the malware protection company InfoSecurity People and the penetration testing company, Pentest People who have all supported us in the creation of this statement.

Want to detect payment fraud on your website? Let’s Go!